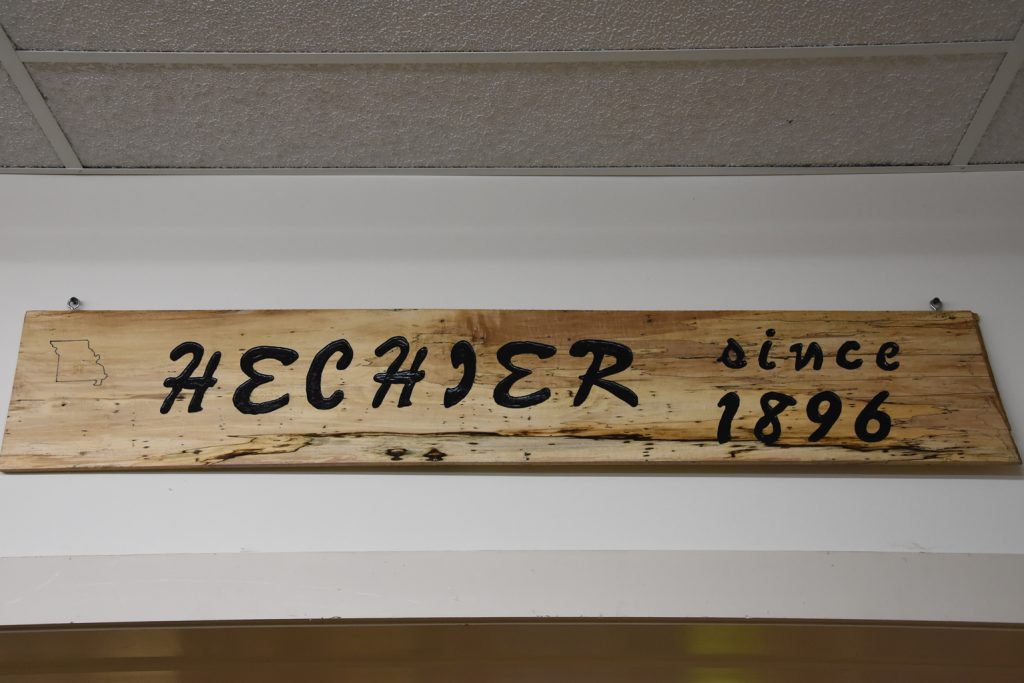 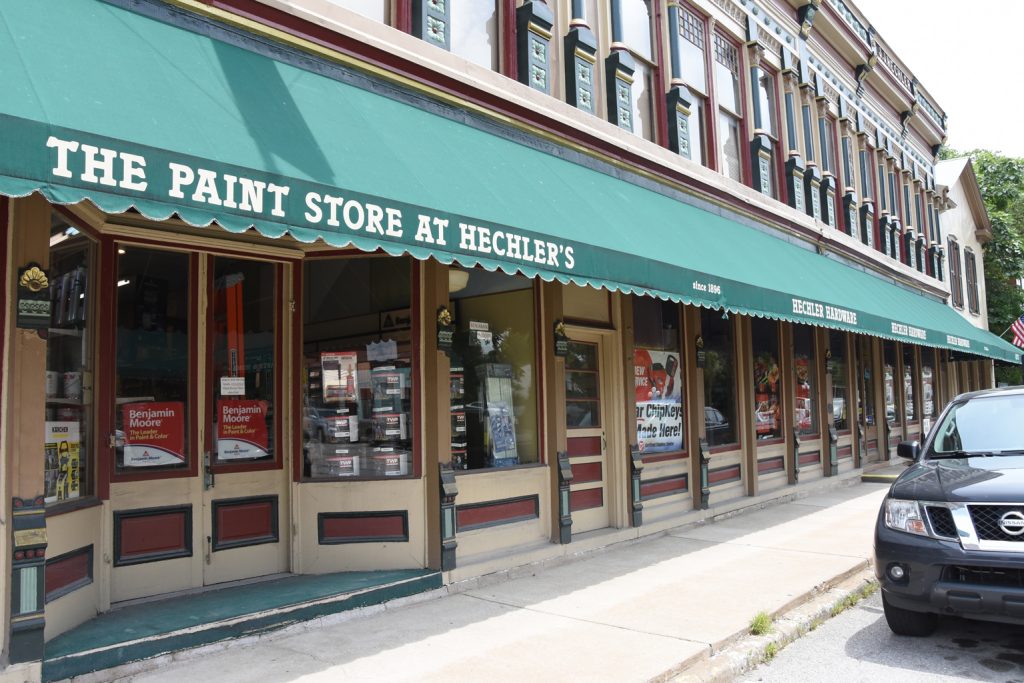 On March 4, 1896, Julius John Jacob Hechler opened the doors of his hardware store for its first day of business at 530 Main Street in Troy, Missouri. No doubt, the town of Troy was busy as usual. The livery companies were taking their passengers to and from the train depot on Front Street.

Leonard Henry, Julius’ brother-in-law, was preparing his Opera House across the street for the “Komedy Kompany” that was to arrive on the afternoon train for the evening’s entertainment. The hotels were probably going to be full that night. The air was filled with the music of iron answering to iron from the blacksmith shops nearby. George Kempf, Julius’ other brother-in-law, would soon be loading his wagon with groceries for the first delivery of the day. Several people were already gathering at the town spring for a cool drink of water and an exchange of the latest gossip.

Julius’ brothers, John and Frank, worked for him in the early years of the business. Later, John opened his own machine shop in Troy where the Marble Works now stands. Then, he moved to Vandalia, Missouri, where he opened a large machine shop for many years. Frank later opened a hardware store in Warrenton, Missouri. Eventually, he moved back to Alton, Illinois.

Julius Hechler was the son of German immigrants, Adam and Margaretha (Hoerner) Hechler. He was born in St. Louis, Missouri, July 29, 1863. His family moved to Alton, Illinois, shortly afterward where his father opened a bootlery, then a grocery store and finally a hardware store on Second Street. Julius moved to Troy in 1886, where he was married to Mathilda Kempf. Her parents were also German immigrants and owned a large hardware store on Market Street in St. Louis.

Julius and Mathilda became the parents of three children, Ernest, Willie, and Laura. Willie died when he was only a few months old, and Mathilda died in one of Troy’s typhoid epidemics in 1892. Laura died when she was 18 of Bright’s Disease.

In 1904; Julius was in dire financial trouble and almost lost his business, but Charles Martin, attorney-at-law, bought into the business, saving it from ruin. The business became known as Hechler and Martin. Eventually, Julius discontinued his implement business and became financially secure again. In 1908, Garner Ellis bought out Charles Martin’s share and in 1909, Ernest Hechler, Julius’ son, bought Mr. Ellis’ share. The business became known as J.J. Hechler and Son.

Julius’ other children, Fred, Henry, Edward, Louise and Edith worked in the store for many years.

In 1918 and 1919, Ernest was absent from the business while serving in World War I. He was a member of the 4th Division 12th Machine Gun Battalion. He was involved in several well known battles, including the Battle of St. Mihiel and the Great Battle of the Argonne in France. After the war, he served with the Army of Occupation in Germany. 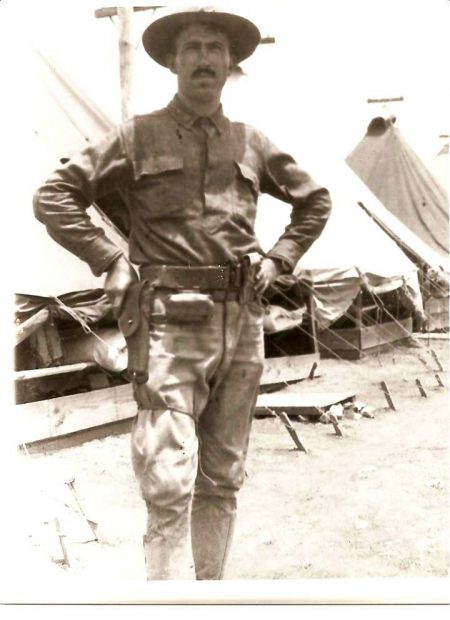 Upon returning from the war, Ernest married Ethel Schaper of rural Troy. They had five children, Elwyn, Mabel, Ethel, Lucille, George and Robert. Ethel Lucille died when she was 7 years old of complications from rheumatic fever.

In 1929, Julius, who had been suffering from angina, died in the dentist’s chair while having a tooth extracted. It was thought that the effects of the ether was too much for his heart. Ernest became full owner of the business at that time.

Ernie’s sons, Elwyn, George and Robert started working at the store as soon as they were old enough to dust a shelf, wield a broom or unpack a box.

In 1951, when Ethel became ill, Ernie took a leave of absence, staying at her bedside throughout her illness until her death in October of that year. In 1954, Ernie married Nora Hopkins, who was a wonderful companion to him.

In 1966, Ernie sold the business to his son, Robert. He continued to work for Robert for several years. He had a bad habit of telling customers that he hadn’t carried an item for 50 years rather than be disturbed from his reading as he sat at his old roll top desk. Ernie came to the store every day until about six weeks before he died at the age of 92 in 1980.

Robert or Bob as he is called, married Julia (Judy) Mozier in 1955. The Mozier’s operated a dairy farm north of Troy, and had a milk delivery business in Troy for many years. Judy, along with her sister, Frances, and brother, John, were very involved in the venture, so Judy had an affinity for business before she became part of the hardware family.

Bob and Judy worked hard to make the business strong and able to compete in today’s market. Their main objective is to serve the people of Lincoln County and provide the personal service that they and their employees have always given their customers. Bob continued to install furnaces and air conditioning until the late 1970’s when his health no longer permitted it. He was a certified Lennox dealer for 46 years. Sadly, he passed away in November 2003 and will be missed by his family and friends.

Bob and Judy’s sons, Dan and Phil (fourth generation), are very involved in the business. Dan holds a BS degree in Business Administration, and Phil holds a BS degree in Corporate / Industrial Communications. They, like their father and grandfather before them, practically grew up in the hardware store. They have helped to expand the business and make it competitive in today’s world.

Dan was married to Kimberly Williams of Troy in 1980. They have two children, Ashley and David, who are the fifth generation in the Hechler Hardware family.

Phil married Natalie Borders of St. Charles in 1989. They have two boys, Curtis and Clayton, they are also fifth generation.

Yes, Hechler Hardware has seen many changes over the past 100 years. From the old front door, one once saw the muddy streets full of horses, buggies and wagons. The droves of sheep, hogs and cattle being driven down the street to the weighing scales directly opposite the store beside the old Opera House. The huge circus parades that came in on the trains complete with elephants. 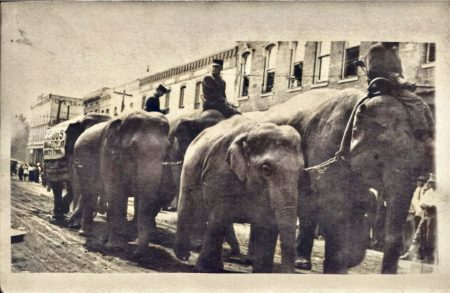 The crowds arriving early for the best seats in the house for the evening’s entertainment at the Opera House. The gathering of the faithful in 1898 to hear that great Southern preacher, Sam Jones, speak to crowds of 500 to 600 people each night. And, at the annual Christmas Ball, sponsored by the young men of Troy that same year, the town was filled with great excitement as the people gathered for the social event of the season to meet Frank James, brother of Jesse James (and ex-bandit) who was to be the honored guest and doorman at the event! There were the hardy individuals who arrived in Troy, gathering supplies and bidding friends farewell as they joined the Gold Rush to the Klondike.

We can’t forget the ragtag group of children who, in 1910, came into Troy on the Orphan Train from eastern cities being brought to the Opera House with fear in their hearts hoping to be chosen by a kind family. It was quite a scene in 1914 when 1,400 people marched for Christ during a revival held by the churches in Troy. And the wonderful fairs, when as many as 12,000 people came to Troy, mostly by horse and wagon to see the great horse races, car races, trapeze artists, hot air balloons and even bicycle races. The footsteps of small children and tired mothers could be heard going up the steps to the shelter of the Temperance Benebolent Association, which was above the store, for their own safety. The hundreds, perhaps thousands, who climbed the same steps to have their pictures taken at Mr. Fred Hurd’s Photography Studio. There were the beautiful brides, handsome grooms and new babies, the growing families and fourth generation pictures. Later, Mr. Arnold Hiler would be taking pictures of the sweet, sad brides and the dashing grooms in their uniforms before they left for World War II. Then there were the sad partings and parades for those departing for the Spanish American War, World War I and World War II.

Now, from the old front door, we no longer see horses and buggies, except during the Youth Fair Parade. People no longer climb the stairs to have their pictures taken; the old backdrop of magnificent pillars, drapes and ferns hangs limp and forlorn. Many automobiles pass each day. We see many familiar faces and many new ones. We welcome them all.

The more things change, the more things stay the same. We still give the same personal service to our customers that Julius did over 100 years ago. We still have many of the original fixtures, the wooden floors in the main building are original, along with the nail bins and old iron ladder that rolls along the wall. The beautiful brass National Cash Register that Julius Hechler bought in 1912 is on display. We’re selling wood stoves again in the newly renovated Opera House across the street. Instead of the old reel type lawn mower that Grandpa Ernie had so much trouble selling, we have the latest in lawn and garden equipment. And the roof still leaks! 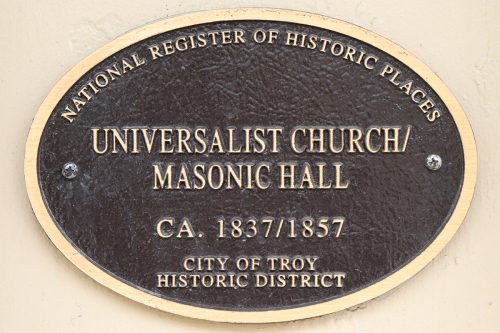 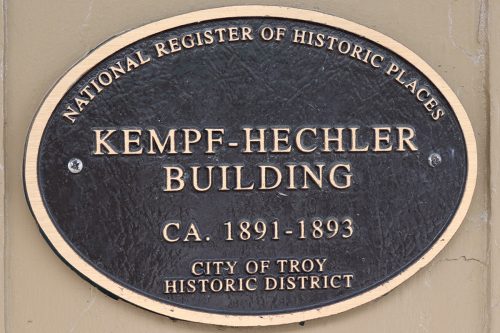 On the right side of the photo starting closest to the viewer are Kemper Furniture (now Troy Furniture), the building with the Cupola and weather vane on top is the Universalist Church and Masonic Hall. This building is still standing and now part of Hechler Hardware.

Of interest is the ball on the weathervane – it has bullet holes in it as a result of being used for target practice by Union soldiers during the Civil War. The solders were stationed across the street in a log stockade fort during the war.

The stair step building next to the church was a store called The Old Stand – it was torn down by the Hechler family to build the hardware store.